The Turkish FA had been given special permission by FIFA to pay tribute to their most famous referee, Cuneyt Cakir, who has announced his retirement after 21 years as a top referee. 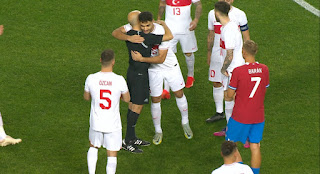 Two-time World Cup semi-final referee Cuneyt Cakir, 45, was given a special presentation and was allowed to referee the first five minutes of the friendly game Turkey – Czechia, played in his home country. He then handed over to Collum, who refereed the rest of the match, in what was a first in world football. 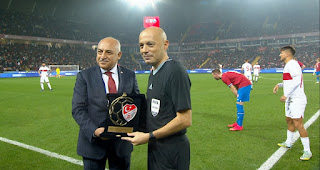 Cakir said: “Every professional career has to end one day, but this is an incredible gesture from our association and from FIFA for allowing this to happen. My biggest ambition was to referee at a World Cup and I am happy that I did that.” Cakir was in charge of the UEFA Champions League Final in 2015 and has attended two World Cups (2014, 2018) and three European Championships (2012, 2016, 2020).