Kathryn Nesbitt had spent a decade balancing parallel careers in analytical chemistry and soccer officiating when, in 2019, she put her scientific brain to work and synthesized a solution for the most pragmatic path forward. Two weeks before Nesbitt left for France to serve as an assistant referee at the Women’s World Cup, she stepped down from her assistant professor position at Towson University to focus on officiating full-time. What data points informed that decision? She reached the pinnacle of women’s soccer refereeing that summer and had broken into top-flight men’s soccer as well, with dozens of MLS games under her belt. Knowing the 2026 men’s World Cup would be held in the United States, Canada and Mexico, Nesbitt mapped out a plan that would culminate in her being on the sideline of the sport’s premier spectacle. “I had no idea if they would ever let women officiate at that World Cup, but I wanted to see if I could do that,” said Nesbitt, 34. “I realized at the time that in order to even attempt that, I would need to dedicate all of my time and effort into one job.” 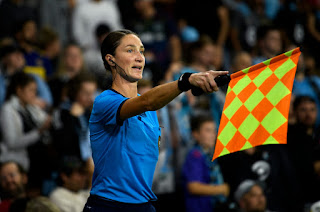 Once Nesbitt shifted her focus to officiating, her ascent accelerated. In 2020, she claimed MLS assistant referee of the year honors and became the first woman to officiate an MLS Cup final. A few months later, Concacaf tasked her with men’s World Cup qualifying assignments. By the time FIFA announced its pool of referees for the 2022 World Cup in Qatar, the Philadelphia-based official thought she might have a shot. On May 19, Nesbitt woke up, scrolled through Twitter and saw FIFA’s unveiling. The tournament, FIFA stated in its announcement, would feature the first female referees in the 92-year history of the men’s World Cup, with six women among the 129 officials. Zooming in on the 69 assistant referees, she saw the listing: “NESBITT Kathryn. USA”. “I just got jaw-dropped, stared at it, couldn’t even believe that this was happening,” Nesbitt recalled. “Then I probably jumped around the room for the next 20 minutes.” 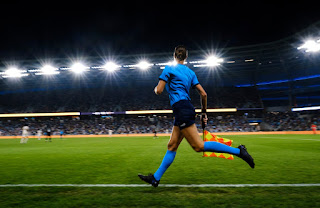 Nesbitt prides herself, as a referee or a chemist, in processing the information at her disposal and arriving at the right conclusion. But in calculating her path to a men’s World Cup assignment, she shortchanged herself – by four years, in fact. “She certainly achieves the highest standard in everything that she does,” said Mark Geiger, a former MLS, Olympic and World Cup referee who now serves as the director of senior match officials at the U.S.-based Professional Referee Organization. “She doesn’t settle for anything. She sets goals for herself, and she does everything that she possibly can to achieve those goals, whether it’s in the science field or whether it’s on the soccer field.” A soccer player in her youth, Nesbitt was a restless 14-year-old sitting through her little brother’s games in Rochester, N.Y., when she first volunteered to be an assistant referee (commonly known as a linesman). The role typically involves making throw-in, goal kick, corner kick, foul and offside calls, but as a teen volunteer with a familial conflict of interest, Nesbitt was simply asked to wave the flag when the ball went out of bounds and leave the rest to the paid referee. “Then one of the guys actually asked me, ‘Hey, would you like to make money doing this?’” Nesbitt said. “And I was like, ‘Yeah, that sounds great.’” A senior-level figure skater and a volleyball player who competed for St. John Fisher University in Rochester, Nesbitt divided her time among no shortage of athletic exploits. Around the time she was wrapping up her college career, she began serving as a fourth official for games involving Rochester’s minor league men’s team. Before long, Nesbitt landed a spot in a now-defunct U.S. Soccer program for fast-tracking top officiating prospects. In 2013, she became an assistant referee for the NWSL. Felisha Mariscal broke through as the first female official in MLS a year later, and Nesbitt made her MLS debut in 2015. But even as she rose up the ranks, soccer remained a side hustle. After studying chemistry as a graduate student at the University of Pittsburgh and completing a postdoctoral research fellowship at Michigan, Nesbitt joined the faculty at Towson, a public university in Maryland, in 2017. For the better part of two years, she did some 50 hours of lab research per week. Most Friday nights, Nesbitt would crawl to the airport through Baltimore rush-hour traffic and hop on a plane — to Los Angeles, Minnesota or wherever else her MLS assignments took her. After officiating a match, she would fly back Sunday night and do it all again. As a 6-foot former college athlete, she has no problem acing refereeing fitness standards designed for men. And Geiger can’t recall seeing her rattled, even in games that threatened to spiral out of the referee crew’s control. “She not only can analyze what the correct decision should be, but she also knows from a feeling aspect what the best decision for the game would be,” Geiger said. “And they’re not always the same. Sometimes you need to really feel the game and know what the best decision is at that particular moment and what’s going to help the referee group maintain control of the game. She understands that.” 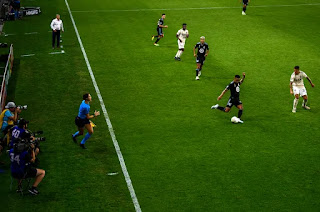 Although MLS recently completed its eighth season using female referees, Nesbitt last year became the first woman to officiate Concacaf men’s World Cup qualifying games. She remembered getting plenty of stares from players, especially in those first few matches. Nesbitt said match coordinators also tended to mistakenly assume she was just the fourth official, there to help with substitutions and timekeeping but not roam the pitch. “One of the biggest things I’ve learned in my career – and this has been in chemistry too, both being very male-heavy areas – is the best way to impress is to do your job well,” Nesbitt said. “But it would always be funny the first time I would do a sprint with one of the players down to the corner flag, and he’d look over, and I’d be keeping up with him. I think that had a big effect just gaining some respect.” Within months of her first men’s qualifier, Nesbitt had gained enough respect to book her ticket to Qatar. Eventually, Nesbitt figures she will hang up her cleats, stash away her flag and return to chemistry. For now, though, she understands her status as a soccer trailblazer – even if hearing that label prompts her to let out an embarrassed groan. As she prepares to make World Cup history, Nesbitt revels, appropriately enough, in the satisfaction that she made the right call back in 2019. “This was an impossible dream for me, and just being able to witness females at this event now makes this realistic for all women,” Nesbitt said. “Whether it be in refereeing, whether it be in a different sport, whether it be in something completely different – sometimes just having a visual like that can make something be real. If I get to play even a small role in that, that’s really cool.”

Nesbitt will live an ‘impossible dream’