On the road to 2022 World Cup, Law5 The Ref is proud to publish an exclusive interview with one of the officials attending the big tournament in Qatar: Salima Mukansanga from Rwanda.

“I’m not regretting anything. Here I am, and I deserve to be here. This is my time, and I have to seize this time to make it shine.”

Salima Mukansanga is one of three women who will take part in the men’s World Cup 2022 – a true trailblazer, not only for her home country Rwanda or the whole of Africa, but for the world.

After initiall being rejected by the Rwandan FA on account of her age, having approached them about joining a referees course straight out of secondary school, she taught herself the basics of officiating, the Laws of the Game, and was eventually given the opportunity of studying with other new referees.

“Actually, at the time I was refereeing in the local Rwandan leagues, it was new, because we didn’t see women referees. It is a field dominated by men. People did not accept what we were doing. They would reluctantly say ‘She’s doing fine’.”

Having been given her initial formation, she returned to her hometown and began to officiate matches for veterans, then amateur players, and then eventually worked her way up through the local footballing pyramid, starting with third division men’s games.

In an exclusive interview for Laws5_The Ref, the 34-year-old referee answered six women’s questions about her refereeing career and passion, her challenges, and aspirations. 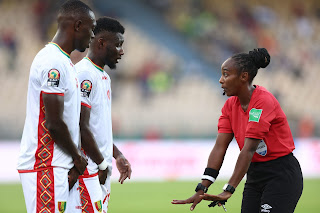 How were you encouraged as a referee? And how were you supported as a woman in football? Was there a mentor?

I have loved refereeing since childhood, I was inspired when I used to go to games in my hometown and I would look on the field watching the players but also the referees. Seeing them in action was a big inspiration for me. So being a referee is really something I wanted to do, and it has been a motivation and driver within me. I just love it. In the beginning, I used to officiate in the local leagues for men and second division women. It was not professional, just local in our FA. Soon after that, I developed my referee abilities and started refereeing in a national league second division, second division women and then up to the first division men.

You have studied nursing and obstetrics. How do you balance your main job and refereeing at the highest level? What does a typical week look like?

I have been putting all my effort into refereeing these days. Right now, it’s only professional refereeing, with daily training, matches, analysis of videos and watching the games.

If you could change one aspect of refereeing or the Laws of the Game, what would it be?

Some people did not accept and did not believe that women referees should be refereeing men’s games. FIFA has done a lot to support in this area. FIFA believed in us, this was the first step that they made. By providing trainings, seminars, support to women referees this has provided us with opportunity to develop into professionals. FIFA is not just taking women and giving them a chance to be there – No, it is not a chance, we have been working hard for this, doing the work, the trainings, the fitness tests, etc. We have been doing the same as men, and we are prepared to face the tournament and to succeed. We want the tournament to be successful, and we ourselves want to be successful. Whatever people say outside, at the end of the day, they will accept when they see the result. 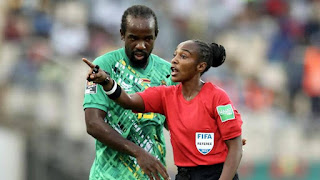 What have been the big surprises in your career path so far?

I had never dreamed to go to the Men’s World Cup. The first time I was nominated to go to a World Cup, it was in France for the Women’s World Cup, so my next target was more at the Women’s World Cup in New Zealand in 2023 next year. Being appointed to the Men’s world Cup is something new, another opportunity we get. It means FIFA recognises that women are working hard, that we are providing quality of refereeing and that we can deliver and reach higher, up to the top of the men’s game.

What have been challenging moments in your career? And what have you learned from them?

Actually, at the time I was refereeing in the local Rwandan leagues, it was new, because we didn’t see women referees. It is a field dominated by men. People did not accept what we were doing. They would reluctantly say “She’s doing fine”. But within me, I had a big dream to reach far, to be a professional referee, but people did not accept me. However, day by day, they started to accept it more, because of the decisions I took. They found that I was making fair decisions and so they tried to accept. After more time, they also started to encourage young girls to get involved in those fields dominated by men, so it was a good time for me as I knew many of the other female referees and we could present a more powerful appearance together.

What do you wish you had done differently?

I’m not regretting anything. Here I am, and I deserve to be here. This is my time, and I have to seize this time to make it shine. I’m really glad to be going to the World Cup, because I worked hard for this. I can stand on my decisions until the future, because I want my future to be bright. And I want young girls to look at me and follow my footstep, because me too, I am now here because I followed the advice of people who have been there. Now, it is the time and I keep focused with the World Cup.