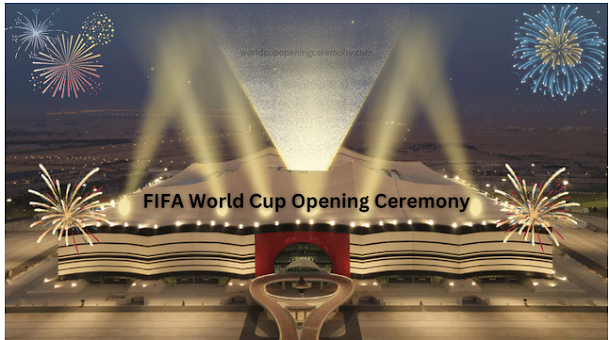 When is the FIFA World Cup opening ceremony?

According to the host country media conference, Khalid Al
Mawlawi said that venue’s gates would open at 3 pm on the inaugural day.

It was initially scheduled to take place the next day but
was brought forward along with the opening match.

Where is the opening ceremony taking place?

The Opening Ceremony will take place at the Al Bayt Stadium
in Al Khor in infront of around 60,000 spectators.

This stadium hosted the opening match between Qatar and
Bahrain of the 2021 Arab Cup.

Al Bayt Stadium will host 6 Group stage games, One round of
16, one Quarterfinal and one Semifinal game.

What will we see in the Opening Ceremony?

Who are perform at the FIFA World Cup opening ceremony?

On Thursday, October 20, only Bollywood star Nora Fatehi has
officially been confirmed. It is big news for the Bollywood entertainment
industry.

Some Reports suggest that hip-hop artists J Balvin and Black
Eyed Peas will be performing and they could be joined BTS.

Shakira is a strong candidate to get on stage. She already
performed the “Waka Waka (this time from Africa)” song for the 2010 edition.

Besides Nigerian artist Kizz Daniel, American rap idol Lil
Baby name is also mentioned, and British fans are most hopeful to see Dua Lipa
in the opening ceremony of the most prestigious tournament.

When is the FIFA World Cup closing Ceremony?

The 2022 FIFA World Cup closing Ceremony will be held on
Sunday, December 18, 2022, in Lusail Iconic Stadium in Lusail, Qatar.

The Qatar 2022 World Cup Closing ceremony will take place on
Sunday, December 18, 2022, the national day of Qatar. It will be held at the
80,000 seaters Lusail Iconic Stadium in Lusail, which is 15km north of the city center of
Doha. This stadium will also host six group stages and three other knockout
matches.

Unfortunately, the host nation does not share any
information or plans for the Closing Ceremony. But we hope Qatar is going to
the biggest celebration in the country on National day.

Which Channel will cover the Opening Ceremony Show?

The opening ceremony will be aired on all major TV networks,
streaming services, and mobile apps. Here is the complete list of the FIFA
World Cup Broadcasters:

By following our post below, you may start enjoying free
World Cup 2022 Opening Ceremony live coverage in your location.

How to Watch FIFA World Cup 2022 Opening Ceremony Live
Stream in the UK?

Every World Cup game will be shown live on British
television by the BBC and ITV. Both networks will broadcast the championship
match.

On the networks’ websites and apps, every game will be
broadcast live. To view, a TV subscription is required.

Two of the top online TV streaming services are the BBC iPlayer and ITV Hub. Both are
accessible on any device and are free. ITV Hub will become ITVX beginning in
December.

At 10, 1, 4, and 7 o’clock in the afternoon, the first group
stage matches will begin. GMT. At 3 and 7 GMT, the final group stage match and
the opening match of the knockout phase, respectively, will begin.

Anywhere in the world may access BBC iPlayer using
ExpressVPN. If you’re out of the UK, you could use this option to watch World
Cup 2022 for free. Make sure to use the best VPN service to unlock the service
anywhere you want.

The FIFA World Cup Opening Ceremony and All 64 of the 2022
World Cup games will be free to watch on SBS in Australia. Additionally, you
may watch SBS Viceland and SBS
On-Demand.

You may access SBS from another country using a VPN.

Consider the local time conversion when you are out of your
home.

How to watch Soccer World Cup Opening Ceremony Live Stream
in the US?

The group stage will be covered by both Fox and FS1 in the
US, however only Fox will broadcast the knockout stage matches.

The cost of watching the 2022 World Cup will be significantly
lower without cable.

You must utilize a cord-cutting service if you don’t have
cable and want to watch Fox and FS1. The cheapest option is Sling Blue. The
first month is discounted by 50% at just $40.

Another item to consider is FuboTV. There are
more than a hundred other networks, including Fox and FS1. It offers 7 days
free trial for new users. After the free trial, the Monthly cost is $69.99.

When you’re outside of the US, a virtual private network
(VPN) enables you to access US streaming services like Sling. The one we
suggest is ExpressVPN.

How to watch FIFA World Cup 2022 Live Stream in Canada?

In Canada, coverage of the 2022 World Cup will be provided
by TSN;
however, it is currently unknown which games from the tournament will be shown.

If you are able to get the channel as part of your cable
subscription, you may use the login information provided by your service
provider to watch the World Cup 2022 online.

The matches for first place, second place, and third place
in the group stage will begin at 5, 8, and 11 respectively, and at 2 in the
morning. The first matches of the group stage will start at ten in the morning.
At two in the afternoon, we’ll get started with the knockout stage contests.

After enrolling, you will be able to log in to your
preferred streaming service for sports from any place across the world. Using
the methods outlined above, you are welcome to try out our well-known VPN
service free of charge for a period of one month.

How to watch World Cup 2022 Live Stream in New Zealand?

In New Zealand, every single one of the 64 FIFA World Cup
matches will be aired on Sky Sport.

It will be 11 p.m., 2 a.m., 5 a.m., and 8 a.m. when the
first two games of the group stage begin. NZDT. The conclusion of the group
stage is scheduled at 00:00. At eight in the morning, New Zealand Daylight
Time, we will get started with the elimination rounds.

Even if you do not have cable, you are still able to use the
streaming service known as Sky Sport Now. During the current season, viewers
may stream Premier League games for a weekly fee of $19.99 or a monthly fee of
$39.99. Every new month-to-month membership starts with a free trial that lasts
for seven days.

How to watch Football World Cup 2022 Live Stream in India?

In India, the World Cup is being shown on Sports18,
but JioCinema is the only platform that will let you watch every
match in 4K for free.

On a much larger screen, you’ll be able to watch movies in
Hindi, English, Malayalam, Bengali, or Tamil if you use the JioCinema app,
which is compatible with Chromecast.

Using the methods discussed above in conjunction with a
virtual private network (VPN), viewers located outside of India are able to get
live coverage of the World Cup (VPN).

The thing about live stream is that most services have
geo-restriction policy. That means you cannot use the particular service when
you are outside of the service coverage area.

To see the 2022 World Cup from anywhere you want, you could
use a VPN App.

You may access World 2022 from any place, with the ability
to stream it, by using a VPN App. They are safe and they don’t create any
issues. With regard to streaming, ExpressVPN excels.

According to our independent research, ExpressVPN is the
top VPN for viewing the 2022 World Cup. Access to the World Cup 2022 streaming
choices is available to everyone with a strong internet connection.

You have 30 days to test it out risk-free. Every day of the
week, assistance is always accessible. Almost any device, including desktop
PCs, mobile phones, game consoles, and smart TVs, is compatible with
ExpressVPN.