Skip to content
Facebook Instagram LinkedIn Twitter
Home Blog FIFA World Cup Expulsion of Rattin in 1966 lasted 10 minutes and led to creation of cards
The Argentine player was invited to leave the field during the game against England, but he remained on the field for several minutes. It happened in the 1966 World Cup that took place in England. The story occurred in the quarter-finals, where England and Argentina played in the emblematic Wembley Stadium, in front of 90,000 spectators. The game seemed to progress under usual circumstances, but Argentine defender Antonio Rattin did not understand it that way, considering that the German referee Rudolf Kreitlein decided everything in favor of the local team, England. “He even invented handballs”, said Rattin, who played his entire career at the club level for Boca Juniors. 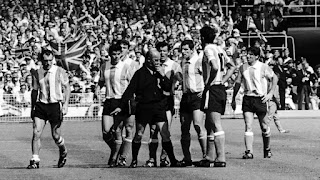 Rattin said at the time that he only intended to speak with the referee to express his disagreement with the decisions. Those with good memory, for their part, believe that he only had the intention of delaying the game, going so far as to ask for an interpreter, since Rattin did not speak German or English, while Kreitlein did not understand a word of Spanish. As there were no yellow or red cards at the time, the referee decided to punish the attitude of the Argentine defender with expulsion, but… How? With gestures that were the signals of the time. “Get out!” Kreitlein exclaimed, pointing the way to the changing rooms, but Rattin, furious, remained on the field for the next 10 minutes. He insisted on the presence of an interpreter, to understand the reason for the referee’s decision, but this finally did not happen. Everything was very messy and full of controversies. The referee would report later that the cause for expulsion was because “he looked at me with bad intentions, that’s when I realized that he had insulted me.” 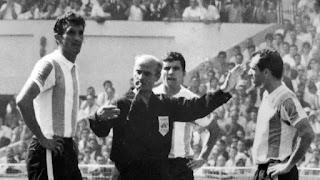 This story and some other failures in communication during the game led FIFA and its president at the time, Sir Stanley Rous (a former referee), to study how to communicate universal disciplinary decisions, which could be understood by any player, without the need to resort to languages ​​or gestures. A short time later, his friend and member of the FIFA Referees Committee, former English referee Ken Aston, proposed the use of two cards as a solution, one yellow, which was synonymous with calm and caution, and the other red, which directly implied the expulsion. He stated in his proposal that his inspiration was born when he was driving his car down Kensington High Street, where he had to stop at a traffic light after the lights changed. 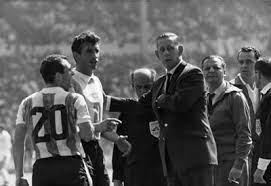 Four years later, at the 1970 World Cup in Mexico, the use of cards was adopted for the first time and Aston was appointed President of the FIFA Referees Committee. A few days before the start of the World Cup, the 30 referees who would participate in the event met at the State University of Mexico City, along with the heads of participating delegations, technical directors and players. The president of FIFA, Sir Stanley Rous, together with his members of the Referees Committee, reported that due to the events that occurred in the previous World Cup during the match between Argentina and England, they had decided to create and put into practice the use of disciplinary cards to avoid doubts or solve all kinds of language problems. The protocol became zero conversation and gestures. When a referee considers that an act causing a reprimand has been committed, he will penalize it with a yellow card, while he will show a red card in cases of expulsion. In both cases, the players should comply immediately, without any kind of reaction. 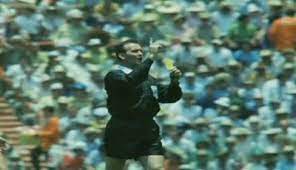 The first referee to use the card was the German Kurt Tschenscher in the opening match of Mexico 1970, played at the Azteca stadium, between the local team and Belgium, where there were 107,000 spectators. The receiver of that first historical card was the Mexican captain, Gustavo Pena, after 30 minutes of play. No one was sent off in that World Cup, and not precisely because of the reticence of the referees, but because of the good behaviour of the players. 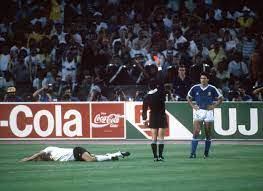 Experience shows that the new tool available to the referees around the world was very helpful for a good control of the game. And the history books say that the architect of their invention, although unintentionally, was an Argentine: Antonio Rattin. The books also say that another Argentine was also a reason for using the red cards in a World Cup final: Pedro Monzon, during Italia 90, after a hard tackle on Jürgen Klinsmann.